2022 Judges List will be published soon – please check back! 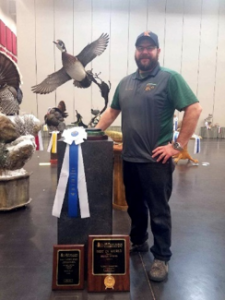 Mike lives in Iron Ridge, Wisconsin with his wife, Jen, daughter Jocelyn, & son Michael. Mike has been doing taxidermy since the age of 10 when his father helped him with his first goose mount. As Mike gained further fascination in the sport of hunting and the art of taxidermy, he’s carried his father’s taxidermy establishment into what it is known as today, Pro Taxidermy. Through years of competing (since 1995), he’s gained much knowledge from judges and fellow competitors. Mike has earned many awards at the State, National & World Levels these include: World Show – 2 Carl Akeley Awards (Gold 2017 & Silver 2019), World Champion Waterfowl 2019 – Second in World 2017 – Third in World 2013 & 2015. National Show – NTA Taxidermist of the year 2016, 2-time National Champion, 2-time North American Champion, 3 NTA State Taxidermist of the Year, 1st place Challenge of the Art 2016. He’s also won 10 Breakthrough Awards – 15 Wasco Awards – 20-time Wisconsin State Champion – 22 Taxidermist Choice Awards. 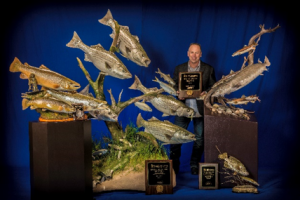 I am Terry Weick and have the great opportunity to Judge our up and coming NTA show in Sioux Falls, SD.  I have been involved in taxidermy since the age of 11, now at 52 I still live in Hopkins Michigan where I grew up.  In 1990 I joined the Michigan Taxidermist Association and being a part of several taxidermy associations over the years, allowed me to meet and learn from some very talented people.  In 1992 I opened a full-time studio doing all phases of taxidermy, with fish being my favorite.  The willingness to learn from other instructors, along with attending seminars and competing helped shaped my success.  For the last 10 plus years I have been fortunate to be a judge & seminar instructor for several state shows as well as Ontario, Quebec, New Zealand and Australia.

At that beginning, learning was from trial and error.  The Northwest School of Taxidermy correspondence course gave me direction.  Today we are fortunate to have great associations and mentors willing to share the latest techniques. During my struggles with taxidermy I never gave up and always was looking for a solution to my disastrous attempts.

Competing is something I still enjoy, because it pushes my focus to do the very best that I’m capable of.  Twenty plus years of attending taxidermy conventions I have won many awards including several Breakthrough’s and 3 Gold Akeley Medallions.  But the BEST awards are the friendships and connections I have made!  I am truly honored to be your judge and instructor for the 2020 convention. 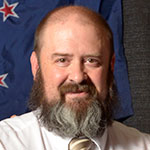 At the age of 15, I began to pursue my passion for taxidermy after having the first whitetail harvest of my life mounted. I became fascinated with the art of taxidermy and attended my first show in 1987. In the early ’90s, my skills started to excel and I even started sculpting my own mannikins. My career has been full of learning, and some nice accomplishments along the way. My loves are Jesus Christ, my family and friends, and the whitetail deer. I look forward to being with you all at the show this year. 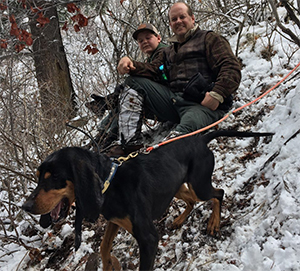 Dave, Melissa and their 2 sons live in Harrisville, Utah at the foot of the Wasatch Mountains.  In addition to taxidermy, he loves to play ice hockey, run hounds, scuba dive and golf.  Dave has been a fulltime taxidermist since 1997 and has experience in all areas of taxidermy with an emphasis now on gameheads and lifesize.  He thoroughly enjoys sculpting mannikins and creating innovative new products to advance the industry.  Dave started his career in the museum field and now sculpts for Research Mannikins, Dave Ferguson Taxidermy Supply and Trufitt Lifeforms.  He has been awarded 3 Best in the World titles (small/medium lifesize, live sculpting), NTA Best of Show Taxidermy Sculpture, People’s Choice Sculpture & Live Sculpting Awards, several Breakthrough’s, WASCO’s, etc.  You can count on a detailed critique at all levels with an emphasis on helping to get you to the next level in your career or competition. 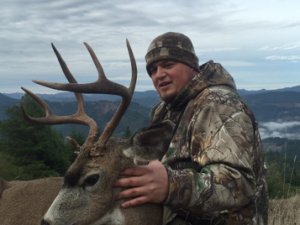 First, it is a great honor to be able to serve as your Gamehead Judge.  My name is Owen Eldred I am a resident of Central Michigan.  My wife Heidi and I are the proud parents of four wonderful children.  Like many, I grew up in the outdoors hunting and fishing developing a love of nature at an early age.  I have been blessed to be able to raise many different species of Deer and Exotics.  Our farm is currently home to 125 Whitetails.  They continue to be some of my best teachers.

My background in taxidermy competition includes Whitetails, Gameheads, and Life Size Big Game.  I have been competing since 2002 and try to soak up all the knowledge I can through seminars, critiques, and great conversation with industry peers.  Over the years I have been fortunate to earn some awards along the way.  Most notable are, National Champion Whitetail, National Champion Gamehead, and most recently 2017 World Champion Large Gamehead.

I look forward to meeting everyone and sharing the techniques I use! 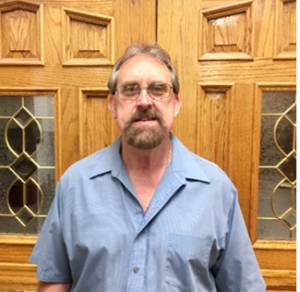 Bob “Hutch” Hutchinson is from Mt. Pleasant, Pennsylvania.  He has been doing taxidermy since 1980 and operating a full-time studio since 2001.  Through the years, he has earned multiple awards at the state and world levels, including several People’s Choice Awards, The Artisan, PA Taxidermist Choice, The Woody Award, Most Artistic Entry, Professional BOC for small/medium Life Size, Van Dykes Most Original & Creative Presentation Award, Governor’s Award and most recently he received his Master’s Certificate in Habitat.  He was the first ever Habitat Judge for the World Show in 2019 and this past September he was invited to Europe to teach habitat techniques to the taxidermists from 16 different countries.  He is passionate about habitat and its influence and contribution to the overall mount appearance.

Hutch is looking forward to the 2021 National Show and is honored to be your habitat judge and a seminar presenter.  He is also proud to be a brand ambassador for the Scenes-n-Nature product line and you won’t want to miss his seminar during which he will be demonstrating the use of static fibers to create realistic habitat.